The pictures below show a before and a, now empty, after in BMRC hall. In June, Bognor Foodbank moved back to their centre on Argyle Road and so what has been a bustling, bag filled hall now looks very empty.

After a time of generous hospitality to Bognor Foodbank (which has ended up for much longer that any of us imagined) BRMC declare purpose fulfilled, celebrating all that has been achieved, fruitful and completed. 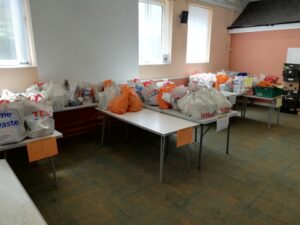 “The hospitality the people of BRMC have offered to Bognor Foodbank is evidence of their commitment to living faithfully as Christian people, a faith which challenges us to live lives of ever increasing love for our fellow human beings. Jesus calls us to live in community with one another and work with others to share God’s love, which includes care for the marginalised and those in need.

Through our partnering with Bognor Foodbank and the many agencies they work with, we have played a small part in demonstrating that Christians care about our community and the lives of those who live in it.”

Bognor Foodbank have written to BRMC to express thanks to all at BRMC. Read the full letter by clicking this link : Thank you BRMC.

“Having the Church Hall space has been an incredible blessing, and has ensured the continued distribution of food parcels to so many people in our community who have been in crisis during the pandemic. Thank you for responding so immediately and continually to the need. We are so grateful for offering the space, and how flexible you continued to be as we all navigated the various twists, turns and delays experienced as the government have looked to ease or amend restrictions.”

While operating from the hall at BRMC, Bognor Foodbank have distributed food to 4976 people in our community, including 1803 children under 16. We continue to encourage all in church and community to support the work of Bognor Foodbank who seek to both offer emergency food parcels and support people out of crisis, and as part of the Trussell Trust network lobby local and national government on issues of poverty and injustice in our society. 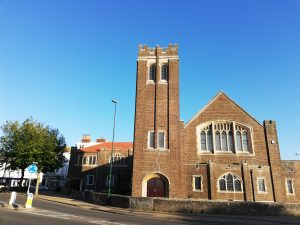